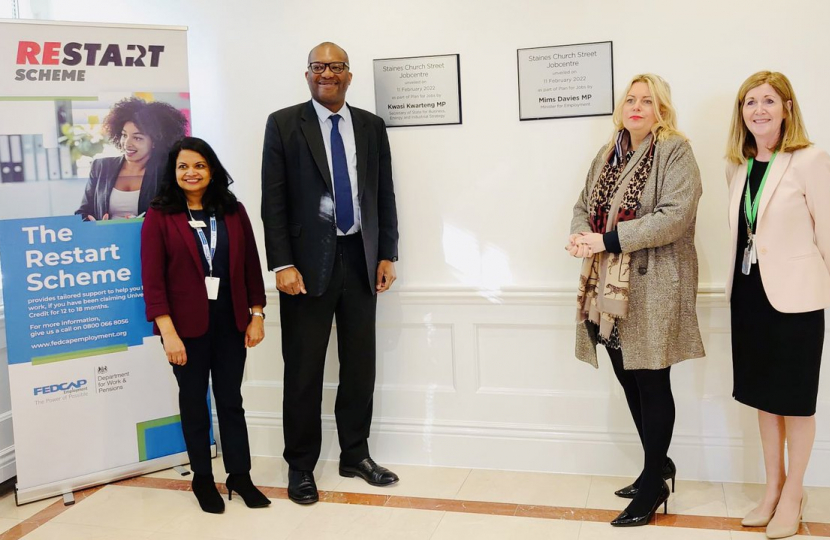 With the economy growing, it is time for the Government to focus on supporting and creating employment opportunities and giving people the skills they need.

Unemployment is almost at the record low levels we saw before the pandemic and the number of payrolled employees has increased by 409,000 people. In Spelthorne, unemployment has steadily decreased over the last year and is now lower than both the regional and national averages.

As part of the Government’s Plan for Jobs, the Department for Work and Pensions has set up new jobcentres across the country, including in Staines. These jobcentres will increase capacity to provide tailored face-to-face support and general guidance to help more people into employment and progressing into new roles.

On 11th February, Kwasi and Mims Davies MP, the Minister for Employment, officially launched the Staines Church Street Jobcentre. Kwasi was delighted to see the new facility, and to meet the dedicated team who work at the jobcentre and provide such an important service to the local community.

Active in the Community

There is so much happening in the Borough from week to week. We are very lucky to have so many active clubs and societies. Kwasi isn’t afraid of getting involved. He has always championed the unique heritage of the Borough and backed local voluntary organisations. Kwasi enjoys many aspects of Spelthorne life. He supports the Spelthorne Natural History Society, Voluntary Action in Spelthorne and the Spelthorne Museum.

Kwasi visited the Talking Tree Café on Staines High Street last week. Talking Tree Café is a Climate Emergency Centre that has been developed by a group of volunteers concerned about biodiversity loss and climate change.