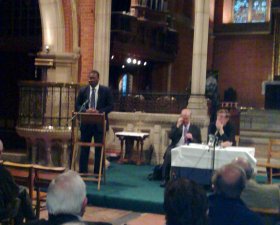 In the run up to the AV Referendum on May 5, Kwasi has travelled around the country as one of Downing Street's appointed champions for the No to AV campaign. Last week, he took part in a debate on the issue at St Peter's Church, Staines, against Serge Laurie, the former leader of Richmond Borough Council, who spoke in favour of AV.

The debate was well attended, moderated by Fr Rod Cosh and included some excellent contributions from the floor. In a straw poll at the end of the evening, 43 people voted against a change to AV and 15 in favor: a solid victory for Kwasi and the No campaign.

Kwasi later said: "The upcoming referendum on AV proposes a change to our voting system. I think this would be a big mistake because our current First Past the Post system is the best way of returning MPs to represent individual constituencies - it is tried and tested. Whilst, in theory, AV would maintain some form of constituency link, it is much more complicated and is, to many of its supporters, a way of getting proportional representation in through the back door."